For applications in many parts of condensed matter physics and cold atoms physics, we use what is known as the Rashba spin-orbit coupled Hamiltonian. This Hamiltoninan is so-named because it couples momentum ​ to the spin ​ where ​ are the Pauli matrices and ​ is a vector of momentum operators:

​ is the mass, ​ is the spin-orbit coupling strength, and ​ is some Zeeman field (it acts as magnetic field on the spin).

In this post, we go through the calculation of the energy spectrum and eigenvectors – a straight forward exercise in undergraduate linear algebra.

First of all, instead of the normal method of finding eigenvectors, we note that we can rewrite this Hamiltonian in the form

where ​. Now, ​ represents a point on the Bloch sphere, and so we expect the eigenvectors to be parallel and anti-parallel to this vector. The energies in this case are very straight forward and amount to the positive and negative of ​:

where we have defined ​ by ​. Note that when ​, the occupations stay the same. However, if we just look at one energy, ​ the ground state energy, we see that the state we get when ​ is almost orthogonal to the original state. 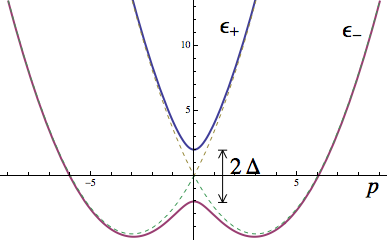 The energy bands themselves look like the figure on the right where the vertical axis is energy (and for this particular example, ​, ​, and ​). Interestingly, the introduction of ​ actually causes the gap to open up – the dotted lines are for when ​.

Now, if we have a bunch of fermions filling up these energies, if we set the chemical potential to be in the gap, we would find that the only excitations would states that are spin-locked to the momentum.

Many things can be done with this Hamiltonian to interesting effect. It finds its way into cold atom physics as well as condensed matter.